Hello folks!  Sorry it has been a while but I had been not so active on the scene; until recently that is!  This Wednesday past I was summoned to court on the despicable charge of public fornication.  I was marched into the courtroom and made to sit on my hands.  Because of this I did not rise when the judge entered the room, which displeased her greatly.  My back chat did not help either but I had no one acting in my defence and the prosecution was out for blood!  After hearing the evidence the jury were left to consider their verdict whilst I waited nervously in the holding cell.  Before long the verdict had been returned.  To my horror the Foreman of the jury handed me a guilty verdict.  Now I was in for it!  The judge sentenced me to be displayed in the pillory for the villagers distain and 36 strokes of the manx birch, to be administered by what looked to me like a very evil man.  I was to take this punishment in silence else I would be forced to wear the scolds bridle whilst still partially restrained in the pillory.  I would barely contain my shame. 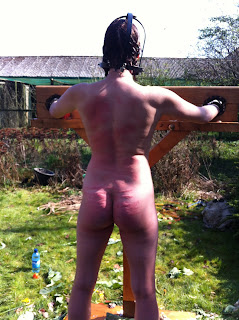 I was escorted outside by the court guards and ordered to strip.  I was then manacled and dragged to the pillory.  I was restrained within it by the neck and wrists and had my leg restrained apart.  This was a very exposed position for me to be left in and left little of my body to the imagination of the baying crowd.  I could hear them throwing insults at me, but not before they started throwing rotten food and freezing water in my direction.  This truly added insult to injury.  In a matter of minutes I had been reduced from a proud young woman to a shivering, disheveled wreck.  The humiliation was almost unbearable and seemed to go on for an age, so much so I was beginning to think they had an endless supply of rotten food and water.  They did not and this part of the punishment was over, but that only meant one thing.  The birch. 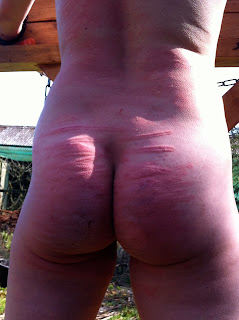 I sensed the punisher behind me.  He put his hand on my now very cold and wet buttocks and I knew he was going to enjoy this far more than I would.  When the first stroke landed I cried out in shock.  This was so much more painful than a previous dose of the birch received because my bottom was cold and very wet this time.  How on Earth was I going to take another 35 strokes of this hateful implement?  That did not matter though as restrained in the pillory as I was I was not going anywhere and had no choice but to take the punishment being meted out.  Stroke after stroke rained down upon my bottom and I kept crying out, despite knowing the consequences of that action.  It really was not until stroke 24 that I began to settle into a sensation of acceptance of my sentence and so I made it to 36.  However I had not managed it silently. 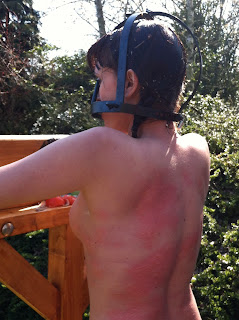 I was released by the neck from the pillory but ordered to keep my wrists as they were.  I had not remained silent during my birching and so must now suffer the humiliation of wearing the scolds' bridle for my sin.  It was fitted over my head, holding my tongue thus silencing me immediately and offering me nothing more than a silent humiliation for the villagers to enjoy.  This really was shaming beyond belief.  Finally the administrator decided I had completed my due punishment and I was released from the bridle and the pillory.  I may have completed my punishment but how was I to face any of the villagers again and look them in the eye? 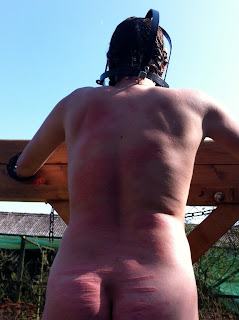 It was a truly wonderful day and I would like to thank Ms S for organising it, the Administrator for all he does, Mr A as the prosecution, Parker and all who came and made my fantasy so real for me.  It was another truly unforgettable day and I am truly lucky to have such friends on the scene.
Posted by Leia-Ann Woods at 10:50

Those there to witness this event were also very lucky. Thank you for the exciting description.

Proud of you baby. That was hardcore, even by your exceptional standards. You just keep raising the bar, which is why you are the best in the game Xx

BCD - I hope all involved enjoyed it as much as I did. They certainly seemed to! Not at all, my pleasure!

TS - Thank you baby, you do say the sweetest things!

Why did´nt you make a film of it with the fantastic girl Leia-Ann?
You are so fantastic

Erik - Not everything I want to do I wish to put on film. Some things I like to do just for me. I am happy to share the experience but to film all I do would strip me of any privacy.

Dear Leia-Ann I do understand, I just want to tell you that I love "A College girls flogging", you are wonderful, what a performance.

Thank you Erik, most kind of you!

Wow,
She's looking so hot after getting punished. I wish to ride on her.

Nice welts. But actually, to my mind they don't resmble birch welts, which are usually small and far more numerous. They look more like cane welts, especially those on the right buttock.

A manx birch was used lovely, rather than the lighter spray, which would have created the welts you describe.

You blog is eye-catching. I get pleasure from it. Thanks for sharing this beautiful piece of writing with me.