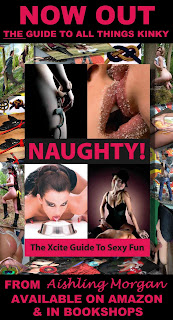 Yes, folks there is a new book in town featuring our kinky practises.  Do get it and enjoy it as from what I have seen it is rather good and has been written by a friend of mine


A message from the writer: It's a mass market cover because aiming the book atthe mass market is the only way to sell a viable number of copies, but thatthe contents come not only from my own 30 years of scene experience but alsofrom sixty other people including specialists in all areas of BDSM, stallholders at the fairs, writers, club organisers, but most of all, genuineenthusiasts for their kinks. Having said that, it is aimed primarily atbeginners and those who might want to expand their knowledge of differentareas, but I expect all but most experienced will find a few snippets toprick their interest.-----
Posted by Leia-Ann Woods at 16:46

Really, Leia-Ann, we need more of a review than that. From the cover it looks pretty mass-market and doesn't immediately ring any bells for me at least. Still, thanks for the notice!

Sorry, I am not a reviewer, I just found out it had been released and said I would mention it on my blog. If you want to find out more it is in bookshops!