I have a new sub!

Another quick post folks, after a fantastic day yesterday with Mistress Switch and friends.  We did a birching on Nicky Montford in the day and then an evening in a Cocktail Bar (same one I CRUSHED my finger in 5 weeks before) having a belated celebration of the lovely lady's birthday. 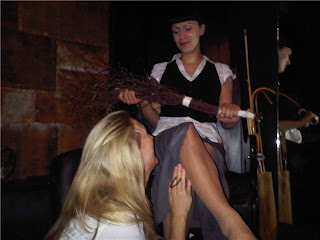 PIC:  My good self with my new sub, Mistress Switch!

The Birching was amazing, Nicky really took it well and suffered in silence, something that no-one else, including me have managed.  The Birch was a spray and made by my fair hand prior to Miss Montford's arrival, she was then given three 30 second bouts of it at high speed by three punishers, which from my own experience I know to be almost unbearable.  It was really something to watch!  BUT, although it was a very serious scene there was something most amusing that happened in the middle.  Mistress Switch was administering the birch with such force that she fell over, giving a very British "ooops" on her way down.  It was the funniest thing I have seen in a while!  Despite this minor setback, Mistress Switch managed to administer the most strokes within her 30 second bout.  Respect girl!  Lovely day, hope we can catch up soon my darling! xxx
Posted by Leia-Ann Woods at 19:09

I am shocked at Miss Montford's silence though!

Yes I fell over, quite hilarious, wait until you see the footage :-) and NO I'm not Leia's sub .

As for Nicky, stoic as always, quite something but broom handles are more her thing lol

Was A GREAT day and lovely to spend time with you babe! xxxxxx