Hello folks!  OK time for part two of my holiday, in Vegas.  We landed Thursday afternoon with the heat hitting us after the cool winds of San Francisco.  This year we decided to treat ourselves to the Bellagio, especially as it was my first official holiday with Mr Slayer.  Our room was amazing, but given the heat in the air and the clear blue sky, I was not long settling in before I slipped on my bikini and headed down for the pool.  If you look really closely at the picture below you will see I am reading Stephen Hawking's new book.  Yes I am such a geek I consider him to be light poolside reading! 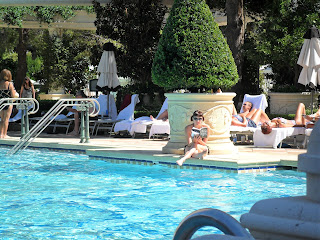 Obviously we hit the town that evening, heading for the PBR rock bar, which oddly did not sell PBR beer.  I have to assume it is named that for some other reason, but I never asked as I was too busy staring a the woman serving me, she was HOT!  On our way we bumped into a hero of mine, a real role model, someone I long to have me tied to the mast of his ship for a good whipping before he had his wicked way with me.  Yes it is none other than: 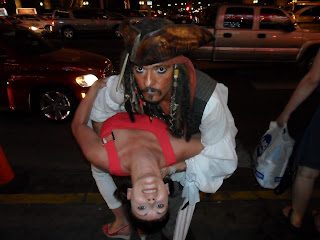 Of course this was not actually Mr Depp himself, but he was really very good!  Friday we spent out having a rather good time at the shadow lane do, where sadly I have no pictures, but I was wearing a tiny dress and ridiculous shoes.  There I had the pleasure of meeting up with Eve and Tony of Shadow Lane, Keith Jones, Mija, Clare Fonda (with whom I arranged a shoot for Sunday), Richard Windsor, Veronica Ricci, Sarah Gregory and Mike Tanner, who noticing my smoking punished me over his vending desk for starting up again despite his punishment of last year!  My cries drew quite a crowd!  Saturday we had just to ourselves and spent the day at the pool before having another mad evening on the strip (no details here folks, what happens in Vegas...).  Sunday was a day of shooting with Clare in her hotel room, so Slayer and I went up there.  Slayer was pleased to meet her, as she is quite a hero of his, which made me smile!  I was lucky to get to play with Veronica Ricci, who is super hot.  Actually, I was rather distracted throughout the shoot, wanting to have my wicked way with her (again, no details folks, what happens in Vegas...).  We were going to shoot off in the afternoon but we ended up hanging out down in the bar with Richard Windsor and others drinking Long Island iced teas.  I even managed to try on his hat! 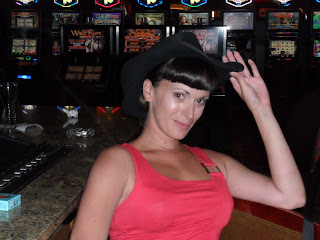 Naturally I ended up rather tipsy and was giggling uncontrollably by the time we headed for the bus back in to town.  Slayer reacted to my poor behaviour by pulling me over his knee and spanking me ON THE BUS.  This is no lie folks, my facial cheeks went as red as my bottom in embarrassment.  Back on the strip we headed for food and another couple of bars, as I was in danger of becoming sober shock horror!  Back at the hotel there was further fooling about with a rather heavy wooden paddle we had bought at the vendors fair.  Monday was our last day so we went up to the malls and hit the shops.  Two pairs of Levis and a Guess top later I felt I had been so good and restrained I gave myself a gold star!  Monday evening we spent down Fremont street and ended up hanging out and drinking Chicago Ale in this cool place that had no sounds of the casino.  Bliss!
Tues morning we really were quite beat, and ready to head home, but not before one last drunken binge before getting on the plane for the horrid red eye back in to London.  I was in tears, I did not want to leave Slayer.  Airport goodbyes are getting harder and harder to do.  That's all folks!
Posted by Leia-Ann Woods at 21:17

I enjoy reading about your holiday. Have been there, but you know how to tell the story, They have fantastic wines. Thanks my dear
Erik

Erik - Not at all, I am so glad you enjoyed it!