It all began on Wednesday morning with a long journey to West London.  I was early but had things to do upon arrival, including find a place to go to the toilet (I would not be allowed to later on) and chain smoke. I managed both with pacing and slowly getting cold, probably more with nerves than anything else.  Are we more susceptible to the cold when nervous?  Quite possible.  The driver arrives and picks me up, saying little to me and is rather dismissive.  I expected nothing less.  I was taken to a car with blacked out windows and a partition between the front and back.  Miss Amy Hunter was present to greet me with her acid tone and remove my phones.  Then it was just me and my thoughts for the journey, which seemed an eternity.  It must be a psychological effect of nerves and being told you may not do something but despite going to the toilet just before I was dumped in the car I needed to go again pretty much as soon as we set off.  it was not the most comfortable of journeys!
I was greeted by Mistress Switch, Katharina and Jadie Reece.  I was blindfolded, gagged and hooded, my clothes changed and left in some place (obviously I was not clear where!), until they were ready to torture me further by having me crawl to my destination.  Inside what felt like an out-building I was bent over, my legs placed in spreader bars and my bottom exposed.  In the background I could hear somebody being beaten.  It disturbed me because I hate hearing others in pain, but I am not sure that was the psychological effect my tormentors were looking for!  I was dragged across to my final destination.  Miss Switch was stood directly in front of me when my blindfold was removed.  She gave me some simple instructions, before stepping suddenly to one side revealing my biggest tormentor for the day.  He stood up and was literally glaring at me.  I could not meet his eyes at first, but he forced me to look at him.  Now began the lecture that I very much deserved, and it was so harsh and true that I could not help crying.  That did not deter him, he continued to point out my poor behaviour, actually shouting at me at one point.  I was in pieces and ashamed of myself.
My talking down was finally over and I was led outside, spread-eagled on the ground and my back, bottom and thighs exposed for the switch.  I was given 100 strokes in batches of 10.  I think I began screaming and crying from stroke 1 and did not calm myself until we had reached stroke 90, when I finally realised I would manage the punishment.  Up until that moment I had not believed I would make it.  I did.  We had reached 100 strokes with the switch, my body hurt everywhere but I had coped.  Just.  I was dressed and led away to a small enclosed pen to calm down.  I did so and prepared to be greeted by a happier owner, however when I heard footsteps coming I could tell something was up.  In he came and lectured me again, saying he had seen further evidence of my poor conduct and that I should prepare myself for another 100.  I was now crying uncontrollably.  I would never cope with that AGAIN!  How could I do this?  I calmed myself a little with time and before long I was brought out to face him again.  I had dropped into a place that I hoped could cope with further punishment, so when a glass of champagne was placed under my nose I did not see it.  I had to be brought back to Earth!!!
It was THE MOST epic scene I have done to date.  It was psychologically challenging, physically challenging and gave me the most cleansing feeling afterwards!  Thank you to all those involved, you know who you are!  Here is a pic of how I looked after the event! 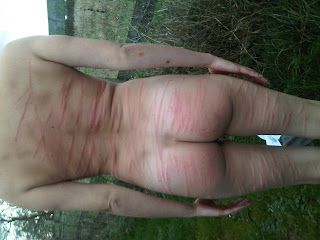 Hope you enjoyed the review folks!
Posted by Leia-Ann Woods at 14:27

Wow! That's some punishment! What were the other girls doing there; were they punished with you or did they take turns to wield the switch, or were they merely observers? Hope you are recovering (but not too quickly!. Presumably we're not going to be able to see this on film?

Hey. The other girls were there to aid in my transit, controlling me and restraining me. No one else was punished on that day. There is no film on this occasion as this was a private event, not a commercial one.

Thank you for sharing it with us: the description and the picture are both very powerful; hope you can now lie down on your back comfortably!

What an epic post, and what an experience! You never cease to amaze me with just how game you are. Graphic photo too. Delighted for you that it went so well, but glad I wasn't there ;) Xx

TS - Thank you my love. No, you would not have wanted to be there but I love you and love that you accept my need for these 'games' at times. Just as you need yours ;-)

Madmusician - Not at all, and yes indeed I can thank you!

Wow. Thank you for sharing an incredible experience with us. I cannot imagine your thoughts when you were told that you had to endure another hundred strokes.

Lovey switching very southern
would love to see a photo of the switch that was used.......I tend to use smaller more flexable switches ( they reach between the legs and cheeks so nicley) EG!

how long did it take the welts to fade?

Much respect and admiration Leia, as I've said you've raised the bar. I can speak for all of us to say we'd never witnessed such a testing punishment certainly not for the light hearted. Personally to see you react in such a way was sadistically delightful as you know I love reaction. To know you got so much out of the day is just BRILLIANT!! Well done babe xx

PS those reading the blog should note that this was done with a very light water willow switch and canings on the back with anything heavier should be avoided.

Hey folks, thank you so much for your lovely comments!

Miss Switch - Oh indeed it was great, thank you so much for such an epic day! You are right, I should have pointed out the choice of implement. This is a don't try this at home folks!