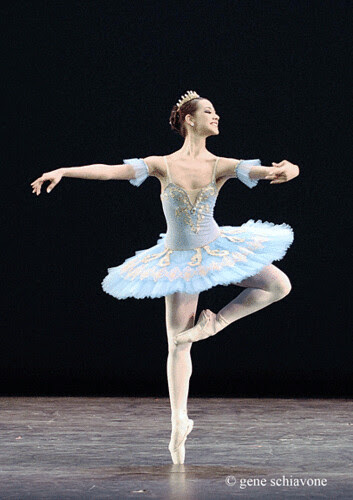 Not the most genuine of smiles, but that is probably to do with the pain involved, not least to the feet!  Trust me, I know.  As an ex ballet dancer I was able to utilise this talent recently whilst visiting HH.  We went out for dinner on the Sunday evening and he requested I wear a skirt, which I did.  In the car HH suddenly pulls over and has me raise the skirt.  Unsure of his plans but not willing to brave it out on disobedience I did as I was told.  Too late I realised his intentions.  He showed me a sizeable clump of stinging nettle leaves, which he placed in my underwear.  I cried out in shock as they did their 'magic' and tried not to sit on them, but failed.  By the time we had pulled up outside the restaurant my most sensitive regions were afire with the stings and my face was showing much discomfort.  I could not let the restaurant staff see me in such discomfort, especially as HH seemed to be enjoying it so much so I adopted the ballet smile in order to try and front it out.  I was not only in pain but really quite embarrassed at having to sit in a rather nice restaurant with nettles in my panties.

Smiling, HH offered me a relief, well what seemed like a relief at first.  He said I could take off my panties, which I assumed would mean a trip to the bathroom.  He did not share that view and if I wanted to remove them then I was going to have to do that at the table.  Given my choice of skirt (very tight) and the constant passage of the waiting staff past our table, this was not going to be easy.  Once more employing my ballet smile I slowly eased up the skirt, covering the shreds of my dignity with a napkin and eased down the panties.  This took a while but I got there.  Pleased with my achievement I held them in my hand under the table, expecting HH to take them there and then.  He did not.  He wanted me to pass them to him.  My cheeks now competing for colour with our red wine, HH took the panties from me and placed them on the table, leaving them there whilst the staff waited on us.  I was so mortified inside but once more clung onto the ballet smile.  Pleased with my discomfort HH finally put them away, which I was more than thankful for!

I never knew how much the ballet smile would be of use!  Amazing what life skills you learn and how you end up employing them in future life isn't it!

Ah, so that's what the 'Ballet Smile' is, and I'm glad that you found it useful! Count not the day lost when you've learned something new. :-)

I will confess I have reservations about the sort of public play you described in the restaurant; but I'm glad that HH enjoyed it, and that you "enjoyed" it. ;-)

You are a dream date, Leia-Ann.

This gives me an idea for a new "The Dating Game." Are Brits familiar with this old game show from here in the U.S.? I read there's a UK show, "Blind Date," that had a similar format. My version would have 3 females answering questions from one male, their ambition to win a date with the promise of obedience---short of sexual relations. Depending on the male contestant's wishes, the prize date might go something like an evening out with you and HH.

Englis Jeff - Yes indeed, mystery revealed! No I know what you mean. Only adults were in said restaurant and I really do think only the waiting staff would have noticed something odd, if at all. It is amazing what people miss!

TFD - I like that idea, much better than Blind Date, which luckily no longer exists!

HelloHeadmaster - No, HH does not belong in a leotard ;-)

I have enjoyed spanking vids for years, but I don't really follow "the scene" too closely. I had seen your name from time to time but never knew who you were, and I don't think I had seen one of your videos. Then yesterday I found your blog here (linked from another spanking blog), which led me to check out Northern Spanking, a company I had heard of, but had never checked out before. I ended up purchasing your video "The Secretary's Secret" (with Amy Woods). Wow!! That caning you endured at the end was fantastic. And I almost exploded when you bent over to touch your toes. And the lovely kissing with Amy was a delightful bonus. So I just had to write and let you know that you have a brand new fan. Thank you for all your work. I can now look forward to checking out more of your vids!