The English Mansion Summer Ball and people named Lucy having an influence!

Hello folks, I know this is showing off my darker side, but we all have one, correct?!  The English Mansion Summer Ball.  This event is rather special and I must say I am privileged to have been invited.  The website is already up and has plenty of info on it and there is more to come soon.  The date is Thursday 26th May, so if you would like to go, click on the image below and you will find everything you need to know: 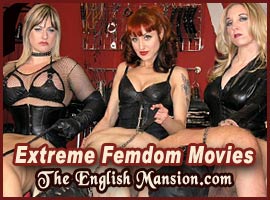 It does sound like THE event of the year for male submissives and Female Dominants.  Need I say more?  There is also a post on Mistress Sidonia Von Bork's blog, which will probably put it all more eloquently than I have:


http://www.theenglishmansion.com/blog/
Mistress Sidonia Von Bork (the lady who used to be Lucy Bailey before going over to the Domme side of life) has been one of the influential people I have had the pleasure to know.  I was did a few sessions with her (as sub of course!) before she stopped seeing people, where I learned much about 1-2-1 play and how enjoyable they can be.  My first films as a sub were with Miss Marchmont, which, as we all know, was under Mistress Sidonia's direction.  At this point I was lucky enough to have two people going by the name of Lucy (or at least one used to!) influencing me as Lucy McLean of Northern Spanking because a really good friend (even better now, life would be just that more empty without her), so did I begin filming for her (as a sub and later as a Domme) and for The English Mansion (as a Domme).  I do remember my first attempts in front of each lady.  I was terrified.  Both are pretty much exceptional Dominants, and I felt like a mere pretender.  Having said that both ladies were so very kind and had me feel at home.  It is because of influence like this that my confidence has built.  This is the scene at its best.  I can say no more...
Posted by Leia-Ann Woods at 15:43

Now you're making me blush and that's my face (not my backside)you're very kind but with your genuine passion for CP you were always a natural:)Especially with a bottom as cute and pert as yours.It has always been an absolute pleasure working with you.

Hello Mistress Sidonia - It was a pleasure to write! I would be very amazed if your backside was ever to blush nowadays! Thank you - the passion never seems to fade as more discoveries are made. Looking forward to catching up in May.