Public humiliation is something I have long ad a fascination with, and right now I am formulating plans to re-inact some of these historical punishments, which, oddly, I find rather hot!
Historically, shameful exposure involved a variety of methods, most often placing a criminal in the centre of the town or village and having the locals enact a form of "mob justice" on the individual, including shouting verbal abuse and throwing of rotten veg. The punishment of public humiliation could be, amongst other things, an offender being forced to relate his crime, such as by exaggerated physical parody. The offender could alternatively be sentenced to remain exposed in a specific public place, in a restraining device, such as a stocks or a pillory.  I already knew about these, but still wish to re-inact something, involving a pillory, rotten veg, freezing water and a birch! 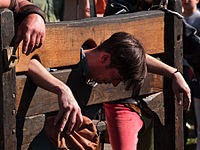 I have just read that The arsenal in the Low Countries included the schandstoel ("Chair of shame"), the kaak or schandpaal ("pole of shame", a simple type of pillory), the draaikooi, customary for adulteresses, and the schopstoel, a scaffolding which one is kicked off to land in mud and dirt).  I have never heard of these, but again, they grab my interest, mainly due to the psychology of the public shaming.  In pre–World War Japan, adulterers were publicly exposed purely to shame them (see below).  One can only imagine what the crowd did or said to the straying couple...but it could and probably did make them squirm... 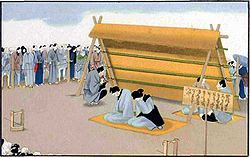 Humiliation is a very personal subject, but just now, these are some of the avenues I am looking to try, maybe in my private life (but I will get careful pictures for on here, promise!), but I would like to explore it.  I have had this itch too long and want to scratch it.  Does anyone have itches they still want to scratch?  Or do you have itches you think are better left unscratched?  I would love to hear your views folks!
Posted by Leia-Ann Woods at 23:49

I'm inspired, too, but with regard to kink, humiliation is a concept I've struggled with for years. It seemed more dangerous, more "wrong" somehow. Physical pain as sadomasochism is easier to accept, inflicting temporary sensation to the body. Humiliation feels more like an infliction on the person, and where it can live forever. When I consider my own past, physical punishment was difficult, but it's the embarrassment or shame that makes the memories so powerful. In any case, moments where humiliation was felt are still felt; the many physical pains of life are healed and forgotten.

I've struggled with the concept because, the very thing that makes humiliation more dangerous makes the kink more attractive. More potent. It's like a blowtorch on the emotions, and the kinds of feelings often associated with CP scenes are the ones I think about. The shame felt for having committed the crime. The public exposure of what is most private. Fragility, humility revealed. In fantasy, it all makes for exciting scenarios. As roleplay, the feelings can be explored more safely. The reality, I'm not so sure. Physical pain, in a controlled setting, can be both completely real and reconciled. The emotional pain of real humiliation is still a kink I keep at a distance. A fire where one can really get burned. But it's exciting that you have this itch. To scratch in the form of public humiliation must require great courage. Much depends on who the "public" is, what you must suffer that they will witness, and how genuinely personal the situation is to you, rather than a portrayal.

I hope to read more about the topic from you, whether it be thoughts or experiences.

Eric - Yes, humiliation can be a dangerous game if not played with the right people. I have had a bad experience in the past, but that did not stop me exploring it, it just made me more cautious as to whom I played in such a way with. I hear what you are saying and you have a highly valid point. I guess the key is to know yourself well enough to ensure you don't sail into dangerous waters, and make sure you and your play partner know each other well enough to play this sort of game safely.

Miami Bob - And then am I outside with it on?!