It is a warm day and my holiday has taken a rather unexpected turn.  A middle aged gentleman approaches me in the street, shows me his police badge and orders me to accompany him what I believe is the local station.  Saying not a word to me, he books me in to an official looking man at the front desk and leads me to a cell.  He orders me to remove my clothes.  I look at him horrified.  What could I have done to deserve this treatment?  And why had I not been formally charged for anything?  His eyes darken, which warns me to obey.  I had clearly broken the law and I needed to appear to co-operate with them.  I begin to remove my outfit slowly, still questioning what had happened.  he took each item from me and folded it over his arm.  I stood before him in my underwear but his hands remained outstretched.  I began to cry as I realised what he meant and took off my bra and panties.  Again, without a word, the gentleman turned on his heels and slammed the door, locking it behind him.  Shivering now, more out of fear than cold I sat down on the floor bringing my legs to my chest.  Hours went by and nothing.  My only break in the silence had been a food drop with water late in the afternoon.  As it turned dark the fear within me grew.  Why was no one interviewing me?  Why had I still not been charged?  My fear slowly turned to tiredness and I believe I must have slept for some hours for when I woke it was dawn.

I was not to be left alone today.  Another gentleman I had not met before entered the room with some fearful looking chains.  I shrunk back against the wall but he grabbed me and easily subdued me.  The first piece was a collar, which he locked around my neck to which he attached a short chain.  Next he fixed iron manacles to my ankles and wrists, a chain connecting the two.  I asked him what what happening and what I had done wrong, but he just ignored me.  He took the chain hanging from my collar and lead me out of the cell.  I dare not resist so I followed him, the chains singing a tune with every step I took.

I was taken to a yard and bundled into the back of a van, where I found three other young women in the same state as me.  I asked them what was going on but they seemed just as afraid and as clueless as I was.  The journey took about half an hour and when the van doors were opened I caught the sounds and smells of a typical market for the area.  We were taken out one by one and linked together with more chain.  I was at the front.  I was not prepared for what happened next.  We were being led towards the market!  I Pulled on my leash, trying to get away from my captor as a slow realisation of what was to happen dawned on me.  He quickly reacted, holding my leash very tight, allowing me little  room for manoeuvre.  We were led on, regardless and I began to shake with fear.  In the centre of the market was a platform, which we were led up to and placed upon.  Each of us was ordered to kneel and we were separated.  Another gentleman carrying a whip gave us all the once over, and after some deliberation he selected one of us.  It was not me.  The girl was taken forward and paraded naked in front of a group of gentleman who to my horror shamelessly began bidding on her.  The sale did not take long and the grinning winner took his 'prize' away.  I was unsurprised to see this man also carried a whip.  The other girls were sold one by one leaving me last.  I wondered why.  Already my mindset must have been altering as I was upset that I should not be selected first.  Maybe they saw a certain something in the young women picked from the street?

Finally it was my turn and I was taken to the centre of the platform.  The display formality was repeated and I could not help but show my embarrassment at being so exposed in front of all these strangers.  The bidding opened but I let the noise wash over me.  No longer was I resisting, more resigned to what was happening and if I was truly honest; curious as to what would happen next.  I was shaken out of my daze when my new owner came forward to collect me.

I was surprised at him smiling at me.  I gave a nervous smile back, but naturally lowered my eyes.  The man told me he was not my owner so no need to behave so.  He was someone sent out to purchase women such as me and my owner had a love of brunettes.  I was puzzled.  Who was this mysterious owner.  I did not have long to find out.  The man gave me a robe to cover myself with, my manacles were removed, with the exception of my metal collar and leash and he led me away.  Within 20 minutes of walking we were outside a beautiful building.  Probably one of the most beautiful buildings I had ever seen.  I was ushered in and instructed on how to behave when presented to the Master. 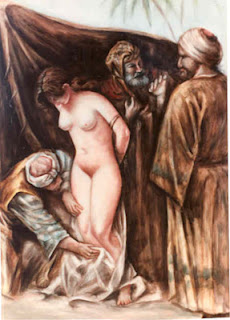 The inside of the building was as beautiful as the outside and I was taken into a grand room with an ornate fountain at the centre.  On the other side of the fountain was a richly dressed gentleman sitting on what looked like a throne.  Where was I?  My robe was unfurled and the man who had bought me stood to one side proudly displaying me to his (and now my) Master.  The gentleman smiled, and came towards me.  I looked down at the tiled floor.  He raised my head with the whip in his hands and welcomed me to his palace.  He explained the rules to me, which there were many, and informed me that any break in those rules would result in a dose of the whip.  He also smiled at me saying that he hoped never to have to use it.  He explained the other women of the harem would help me settle in and show me the ways of this world, which would be very different from where I had come from.  I finally realised.  I had been sold into the slavery of the harem.  What surprised me most is that I was not completely unhappy with the situation.

Disclaimer:  I do not agree with slavery in any form in real life.  This is just a fantasy folks!  Enjoy!
Posted by Leia-Ann Woods at 14:47