A question from a friend on the scene...

...OK, I am not sure if this is the first time I have been asked this, BUT I am always happy to clear up a mystery for one of my scene guys.  My name.  Where did I get it from?  Well Leia comes from a time when I used to wear my hair in silly buns.  I lost a bet at Uni which meant I had to turn up at our student union dressed as Princess Leia in the golden bikini (this is why public humiliation bothers me less than the average person.  Uni does that!), and sadly enough I actually liked the style (and it stopped my hair getting damaged in the lab) so continued to wear my hair so.  Then I came onto the scene (I won't go into that, that is a WHOLE different story), and the gentelman who introduced me informed me that it may be good to have a pseudonym.  He took one look at my hair and called me Leia.  So, there it was, I have ever since been known as such.  Here is a pic of the Uni costume : 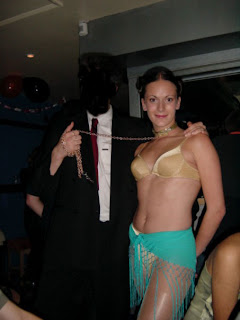 This pic was taken many years ago, so no laughing folks!!   My first year at uni.....ahhhhhh!!!  So, other bit.  where did Ann Woods come from to make LAW??  Well, it comes from one of the funniest lines in a film I love, called "Fried Green Tomatoes at the Whistle stop Cafe" (based on the fact the copper making his statement was EATING his own evidence!!!)
"I'm the law, and you can't beat the law" (in a Southern American accent.
And so it is.  I have become the LAW!!!  Yay!!
Posted by Leia-Ann Woods at 15:21

Wiwh we'd had girls like ypu when I was at Trinity College of Music (Mandeville Place) long ago.

HA!! Not for the vanilla world I am not (and it was November...)

Thanls for that Leia I have often wondered. I line the pic and you are now a princess in your own right

I could look at that Princess Leia pic until Halley's Comet gets back. And then not want to rush away. See, it isn't just the rear views that get the attention!

Incidentally, the Princess Leia Slave scenes in Star Whatsits mark one of the greatest missed spanking opportunities in the history of film.