Hello folks!  I am still resting up with a cold (woman flu - not nearly as serious as man-flu), but the brain needs some use, so here I am.  As promised, a post about Shadow Lane 2010.  It was to be a super British invasion once more with Lucy McLean and Paul Kennedy of Northern spanking, Amy Hunter, Stephen Lewis,  Mr Black, Andi Switch, Nicole Switch and of course myself (there are others I cannot name here).  here is a day by day account, from my perspective:
Wednesday:  This was our arrival day.  Despite jet-lag I was ready to go and we got to the hotel, ready to unpack super quick to get out in the sun.  The rainy season in UK is known to last 365 days, so I could not wait to experience visual on a blue sky :-0 .  Before you could say 110F I was in my shiny bikini and down the pool with others  to soak up the rays: 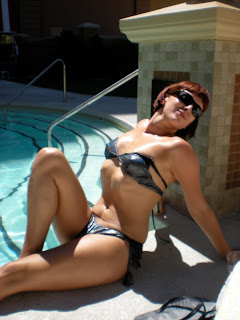 What a poser!!!!  As the sun dipped in the sky it was time for FOOOOOOD!  Yes, on holiday I ignore any diets I am on and go for it.   Going for it also includes ordering obscene cocktails, where an opening competition began:  Who can find the silliest cocktail on the menu and order it?  I did not win this!!!  Silliness reigned supreme until finally tiredness set in.  It was time for bed (which was not undisturbed - but I am certainly not complaining to my union ;-)  )
Thursday:  Yes, I began the day in my default pose:  On a sun-lounger soaking up the sun.  However, my bottom had already tasted six strokes of the cane that morning and many more with a belt made of stirrup leather.  I had been in Vegas less than 24 hours and already I was not sitting comfortably!  A lazy day by the pool ended with meeting up with Paul and Co. for a trip down the strip to Margaritaville.  Yes, you have guessed it, more competitions on who can order the silliest cocktail.  I won this time with an electric blue number, but sadly no sparkler or paper umbrella.  There was a very sexy show at the bar with a woman (semi-naked, it's the rules!) doing a dance in water, finishing on what looked like a giant fish hook.  Naturally I had to expand my cultural experiences by watching this from beginning to end ;-)
Friday:  A busy day today.  I had the privilege of filming with a new American company Strictly Spanking Videos, headed up by Coach Mike Tanner and Jules.  This was a great video, if very tough both physically and mentally.  They ask you to give them something true to life that you think needs dealing with, so I obliged and sent them my own error that needed correcting.  I am not quite sure how he did it but within minutes of the punishment beginning I was struggling to hold it together emotionally (I did, I AM British after all!), and this was not simply a result of the spanking but what he said to me during the punishment.  The family strap he used at the end really did break me so when he sent me to the corner I was almost in tears.  I broke when I was told to face him and explain myself once more.  The tears flowed and there was nothing I could do to stop them.  Like the other rare occasions this has happened, I found this terribly cathartic.  They were great to film with and made me feel so very comfortable.  I loved it so thank you guys!
After the shoot I needed to rest up and meet up with a friend.  Josie Harrison-Marks had arrived at the hotel for the Vendors Fayre held later and had text me asking if I fancied a drink.  Well, who am I to refuse?!  We had some good times and I quickly felt tipsy.  I blame the spanking before.  I AM responsible.  Before long it was time to prepare for the vendor fayre and I was to show Lucy, Amy, Nicole and Josie the dance I had prepared to go with the music track composed by Amy Hunter for Northern Spankings Spankumentary film HOT FUZZ.  I had been asked by Lucy for loads of ass shaking and jiggling, so Swan Lake this was not!  Oh the bitter humiliation!!!!  BUT it did not end there.  The fayre awaited and we were all FAR too sober to perform my dance in front of 300 people who know us well.  Not much we can do about it.  Andi Switch escorts us through the casino and into the ballroom.  Before the Earth could swallow us up the music began.  I was so embarrassed I just went for it:  My old career taught me to never show embarrassment on the face when performing.  RELIEF though when it was over as everyone who watched loved it.  Here is a picture I have seen on Zille Defeu's blog  (who was wearing a beautiful Bettie Page dress that night:  I had bad thoughts whenever I looked at her ;-)): 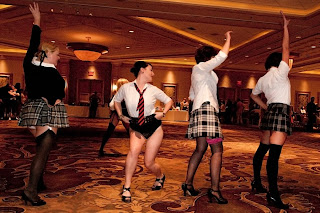 Later, the ballroom descended into spanking and I am never one to feel left out so Amy and I got down to it.  This picture is also courtesy of Zille, so please go look at her musings of the Shadow Lane event: 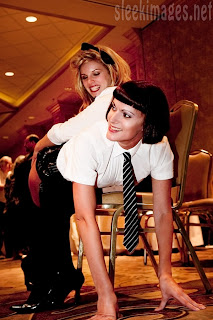 It looks like we are having FAR too much fun!!!!  Ok folks, the rest is for another day.  I shall finish off my musings tomorrow on Shadow Lane.  A thank you to Eve and Tony for organizing this fabulous event year on year.
Posted by Leia-Ann Woods at 13:43

LOVE the sunbathing pic! Glad to hear you had so much fun - and wish I could have been there to watch that dance! It sounds fabulous :)

Thank you darling! Yeah the dance was fun if part of the bitter humiliation that is my life :-) I choreographed it which increased the shame!!

Wow, looks and sounds like you had a fantastic time - still jealous over here!!!

Btw - on a totally unrelated point.... the sexy short bob you seem to be sporting in these pics - very, very sexy!! Moar pls!!!

Oh thank you! So sad you could not be there. You must be there at a future trip! Thank you! Bit of an on the spot decision wrt the hair but luckily it has worked ;-)